Anything is an Occasion: An Interview with Photographer Howard Dinin, part two 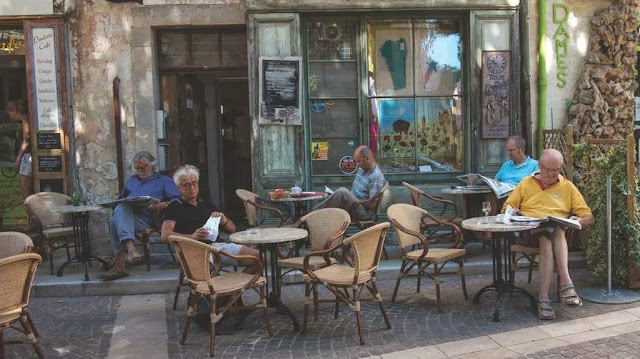 Yesterday, I published part one of an interview with photographer Howard Dinin, on the occasion of the publication of his new book of photography, Sitting.  Today, I lead with the photo above, for how it captures the cafe experience--a community of solitary people, each wrapped up in his own thoughts.  Of all the many kinds of sitting, that one in is my personal favorite, so of course I love this photo and envy the people in it.  I also love the dappled sunlight, the cafe's weathered wood and cobblestones, and the way the picture manages to be both warm and cool at once.

Now here is part two, for your reading enjoyment:

AL: When we left off, yesterday, you were telling me about the organizing principle to Sitting.

HD: I’m an adherent of the school of thought that clings to the theory that there’s no such thing as logic.  Logic is backfill.  We know what to do, we know where we’re going to get, and we get there.  Then later on somebody asks, how did you figure out how to do this?   And the logic you offer up, which may be perfectly rational, and strategic and well-knit and compact, is actually bullshit.

This is how I got through several different careers.  I edited a magazine and I took on the job when the magazine was in crisis. It was 28 days away from the next issue date and we had no content.  And then there was going to be another magazine thirty days after that.  From who knows where, I said, we’re going to do two issues and the theme is going to be home and it all became very easy.

This book went together the same way.  I had a picture, and it said the theme of this book was going to be sitting--it imposed itself on my thinking and the way in which I looked through literally thousands of photographs in my portfolio.  And then it became easy.  I just looked through pictures and I use software that makes it very straightforward to do a quick selection.  I picked an image and hit a key on the keyboard and it immediately went into a separate little data base, and then I could go through the thumbnails of the pictures and work on each image to get into the slight technicalities of it.  I’d get into each image to correct the color and to alter the exposure and so forth in the same way that I would with the serious intent of producing a print of each one.

AL: It’s a beautiful book.  I think it’s a wonderful finished product.  Do you have a favorite among the shots here?  Or is that too hard a question? 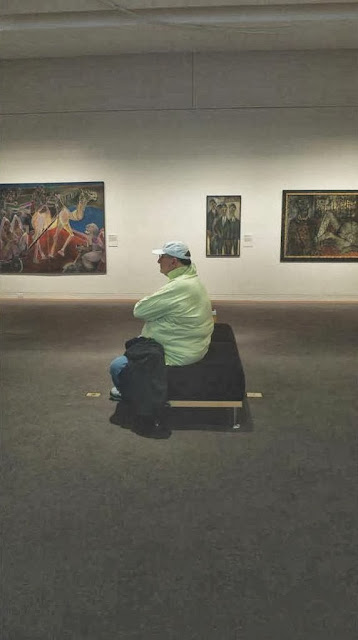 AL: Or is there a particular one that has a good story behind it?

HD: They all have a good story behind them.   What’s amazed me about myself—not that I think that I’m amazing—is that I remember the circumstances of almost every picture that I’ve got.

AL: Many of these photographs were taken in the south of France where you spend part of every year.  Are there pitfalls to photographing a place that is so beautiful, so often photographed for coffee table books and postcards?

HD: I haven’t thought about that for an instant, and I’ve been going there for twenty five years.  That’s hand in glove with always wanting to keep myself primed to see pictures.  I don’t care if somebody else saw it.  And of course in a place like that which is such a magnet for people who are there specifically to see it—there’s not just motif number one, two, and three; there’s motif one through twenty thousand.

The trick is—and this is an ongoing debate, specifically in photography because photography is supposed to be the dumbest of the arts in that you don’t need any talent to shoot pictures—is should the picture be “original” in the sense that nobody else has taken it before?  Well, since I was nine or ten, I’ve known about Ecclesiastes and the idea that there is nothing new under the sun.  And I really believe that.  How many themes and subjects are there?   Poetry has been written for thousands of years on the same ones.

So if I assume anything, I assume my particular point of view--the place where I stand, the instant in time and the particular determinants of how the light is falling on the subject given where I’m standing--is going to make my picture original.  And that’s how I deal with it. 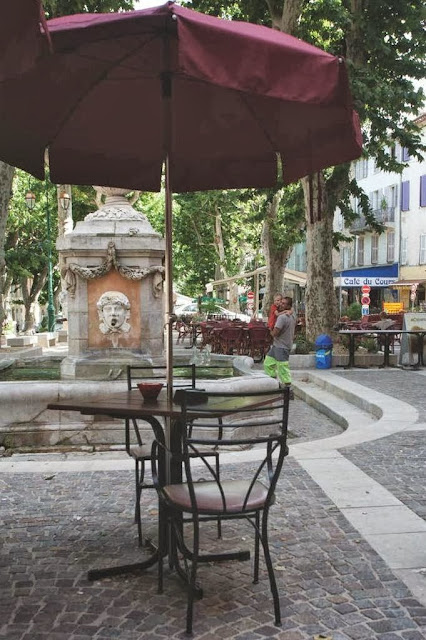 AL:  I’d like to hear about your background as an artist and a businessman.

HD: I was trained to be a scholar of literature and everything else I’ve ever done to earn a living has had nothing to do with that, except for when I taught English for a semester a very long time ago.   All the things I’ve done to make a living I’ve learned to do somehow or other myself.

I’ve edited a couple of magazines.  One, for parents of children with disabilities, is still extant.  That was clearly a “you just got out of graduate school, pal, you’d better find a job” kind of job.  And the other one was called The Boston Monthly, a general interest magazine. That was the best job I ever had.  I loved that job because it required that I give what otherwise seems like a monolithic product—creative direction—but I couldn’t produce it myself, I needed collaborators and though I didn’t think of it in these terms at the time, I had to inspire and cajole them and I had a great staff.  So that was an enormous amount of fun because it was a general interest magazine and I could go through the portfolio in my head and say, let’s do an issue on Thanksgiving. We did two issues where the theme was home and one of the features I assigned was the Boston Red Light District at the turn of the 20th century, because a house is a home.

AL: Do you have particular artistic heroes?

HD: On another occasion, we talked about the painterly qualities of some of my photographs, which I’m quite proud of.  I can’t say that I shoot intentionally to produce a painterly-looking picture, but they turn out that way.   It’s concomitant with the way I shoot, the way I see things and compose, and the way I use light.

But my heroes are not photographers per se, though I have a short list of about fifteen or twenty photographers who I think are the greatest who ever lived.  And some of them are the usual suspects: Alfred Stieglitz, Edward Steichen, Paul Strand, Walker Evans, and so forth.   But as much as that, there’s an even shorter list of painters who are my heroes: Eduard Manet, Paul Cezanne, Edward Hopper, Thomas Eakins, who I think is the greatest painter in America ever, John Singer Sargeant and also some more current color field painters—Morris Lewis, and people of that ilk. 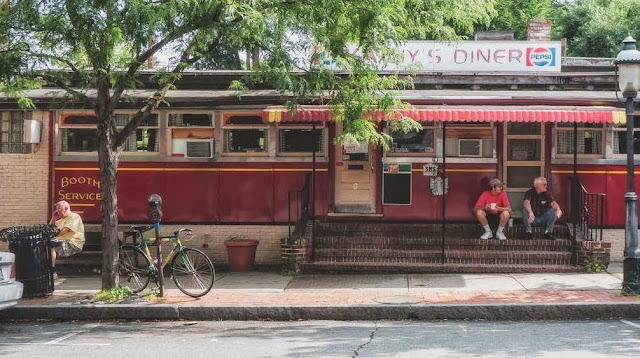 AL: Could you tell me a little bit about your blog?

HD: It’s an acquired taste of course because of my penchant for running off at the keyboard.  Less so now, though I’m not even brief at the keyboard these days, because I’m in what James Thurber calls a long fallow period.  But when I was writing for the blog I would do three, four or five thousand words a day.  I would just bang it out; it was like I was in a frenzy and I would edit it as best I could and put it up on the blog.  I gained a following, and they hang in there.

AL: I wanted to tell you that I saw your rules for Americans in Rural France on the blog, and I thought they were really fun and useful.   I think that’s maybe atypical when it comes to the kinds of writing you do on your blog

HD: From time to time I will do that kind of thing as an intentional switcheroo, because people think I’m going to foam at the mouth and be a curmudgeon and use a lot of big words and get sarcastic about things nobody can do anything about.  And then I like to give them a change of pace.  If you look in the archive, there’s also a piece on what the French don’t have that we do.