Showing posts from October, 2014
Show all

Eeyore wishes you all a very happy Halloween.  Or, if you prefer, a happy Dia de los Muertos : Glimpsed on the third floor of Bellarmine Hall, Saint Joseph's University
Post a Comment
Read more

Losing Farther, Losing Faster: Late October and a Poem for All Souls 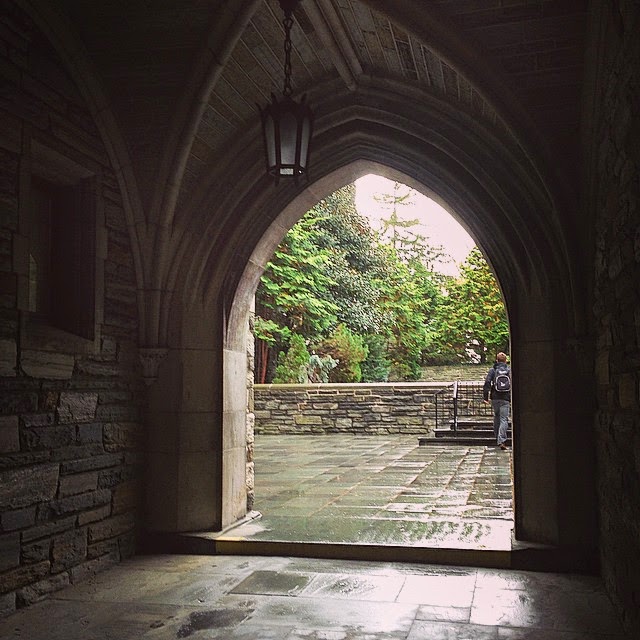 Oh, Autumn!  Season of sweaters and woodsmoke, of fresh school supplies, of deciduous trees flaming out in a last burst of color.  You've long been my favorite time of year. But there's a moment when the first cold October rain washes all your gorgeous watercolor from the trees, a moment when I can't help but feel a bit mournful.   Something in the air reminds me of the early November evening when my father received the diagnosis of the cancer that would take him from us in mere weeks.  And that same late autumn tang was in the air when I took Ophelia, my noble yellow lab, on her last walk, just before I brought her to the vet to be put down. These things aren't autumn's fault. Still, there's something about late autumn itself--its very essence--that forces us, in the words of Elizabeth Bishop, to "practice losing farther, losing faster."   I can't help but take October personally.  And it seems no accident that the month c
2 comments
Read more

"Frequent Disputations With the Earth": A poem by Robert Lavett Smith 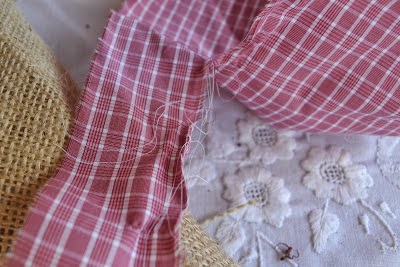 Image lifted from The Homeless Finch Blurbing--it's an ugly verb for a necessary thing.  Blurbing is something writers do for other writers and for literature itself.  We pore over a book and try to distill its essence into a few sentences that will--we hope--help readers pick that book out from a shelf of others.  Today I hunkered down to write a blurb for The Widower Considers Candles --the wonderful new poetry collection from my longtime friend, Robert Lavett Smith .   Sometimes the shortest pieces can be the hardest to write.  There were so many things I wanted to say about Bob's manuscript.  Those three sentences took me hours to get right, and I'd still be struggling over them if I hadn't forced myself to stop and hit send. The book is due out in late 2014 from Full Court Press.  In the meantime, here's one of my favorites from among an assortment of gems, first published in the journal Decanto .   Torn             Vestis virum reddit.
Post a Comment
Read more 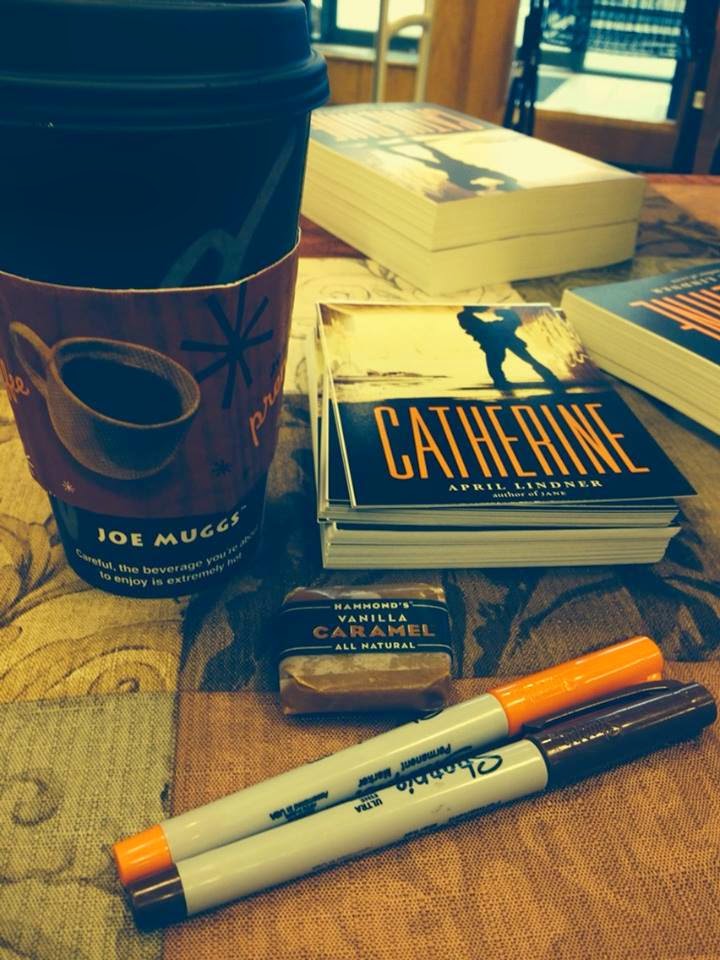 Postcards and lattes and Sharpies: Oh My! Now that my season of back-to-back booksignings has drawn to a close, I'm a little unsure what I'll be doing on Saturday afternoons!     Neither wind nor rain nor gloom of night will stay this booksigner from her appointed BAM! Thanks to all the Books-a-Million stores that hosted me, and to all the lovely people who dropped by to say hello.  I've enjoyed spending time with you all.
Post a Comment
Read more

The Search For Stars Hollow: Cape May, New Jersey 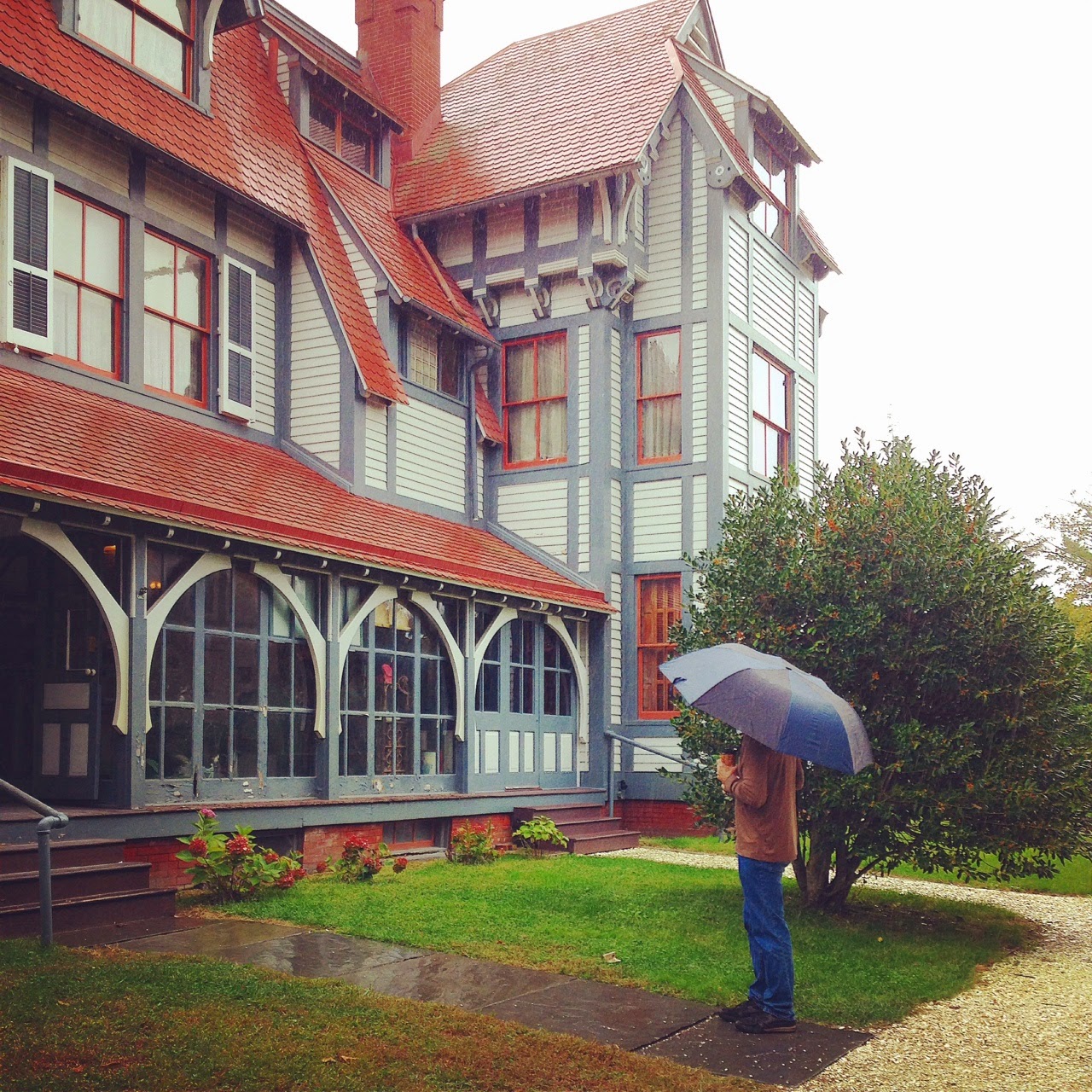 At the Emlen Physick Estate and Museum The entire run of Gilmore Girls  recently became available on Netflix, and re-watching it has renewed a longtime obsession of mine: finding a real-world community like Stars Hollow, the charming but fictional Connecticut town in which Lorelei and Rory Gilmore wittily banter. Before I became obsessed with Stars Hollow, I was in love with Cicely, Alaska, the equally fictional, equally charming setting of Northern Exposure . Towns like these--cozy, quirky, lively, and artsy--do exist in real life.  Before our careers brought us to the Philly suburbs, my family lived in just such a small town-- Yellow Springs, Ohio .  We've missed it ever since we moved away.  And Andre and I have turned our obsession into a hobby, taking day trips in search of the little town of our dreams. This weekend our search brought us to Cape May on the southmost tip of New Jersey.  With its colorfully painted Victorian homes and its pretty beaches,
Post a Comment
Read more 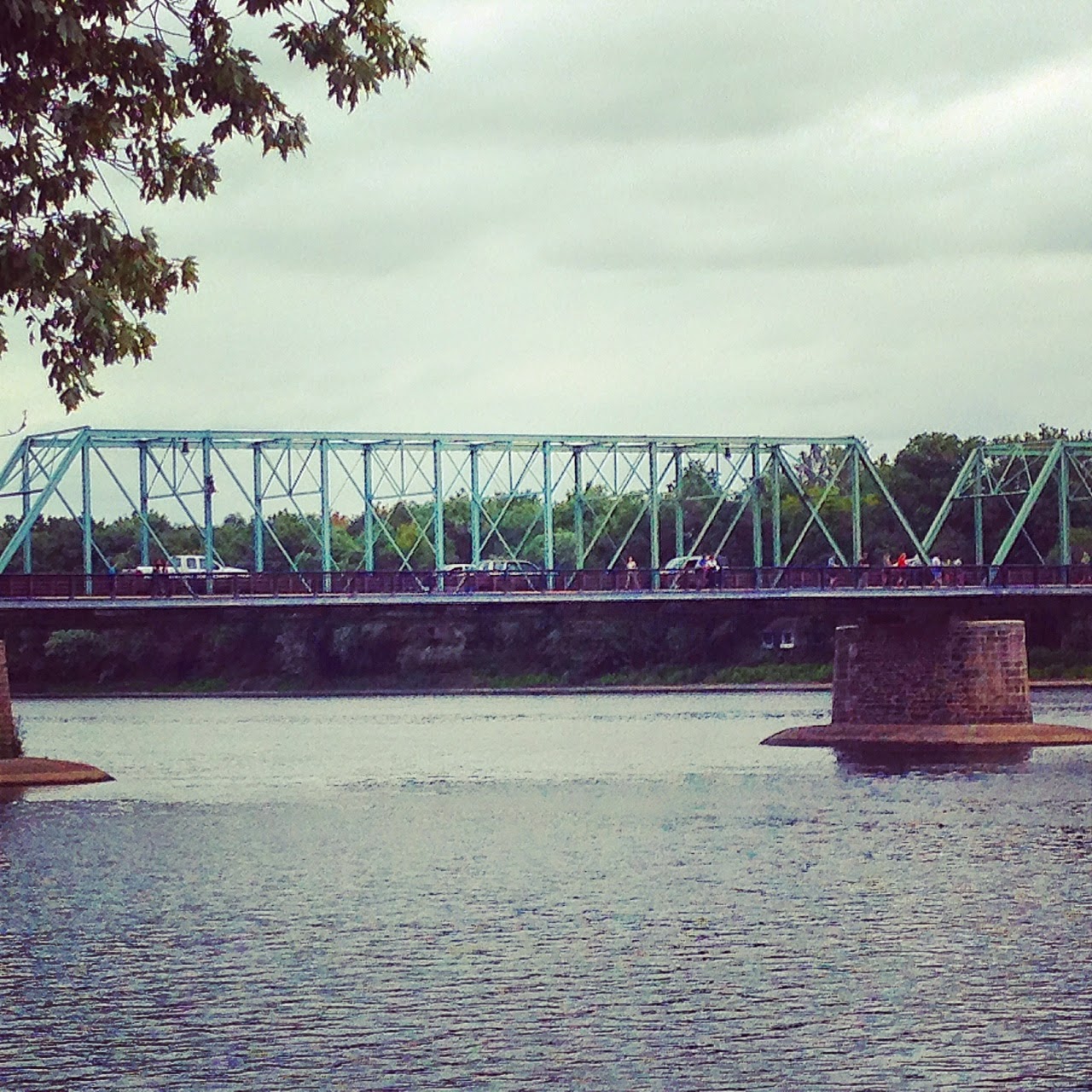 From New Hope to Lambertville Tomorrow, in the immortal words of Tom Waits as performed by Bruce Springsteen, I'm going to "take that ride/across the river to the Jersey side."   From three to six, I'll be signing copies of my novels Catherine and Jane at Books-a-Million in Mays Landing .  The forecast calls for rain--perfect bookstore weather.  So if you're a South Jersey girl or guy, please put on your coziest sweater, grab a pumpkin spice latte, and drop in for a little snug indoors October bookstore cheer.
1 comment
Read more

Nico's (Not So) Great Escape 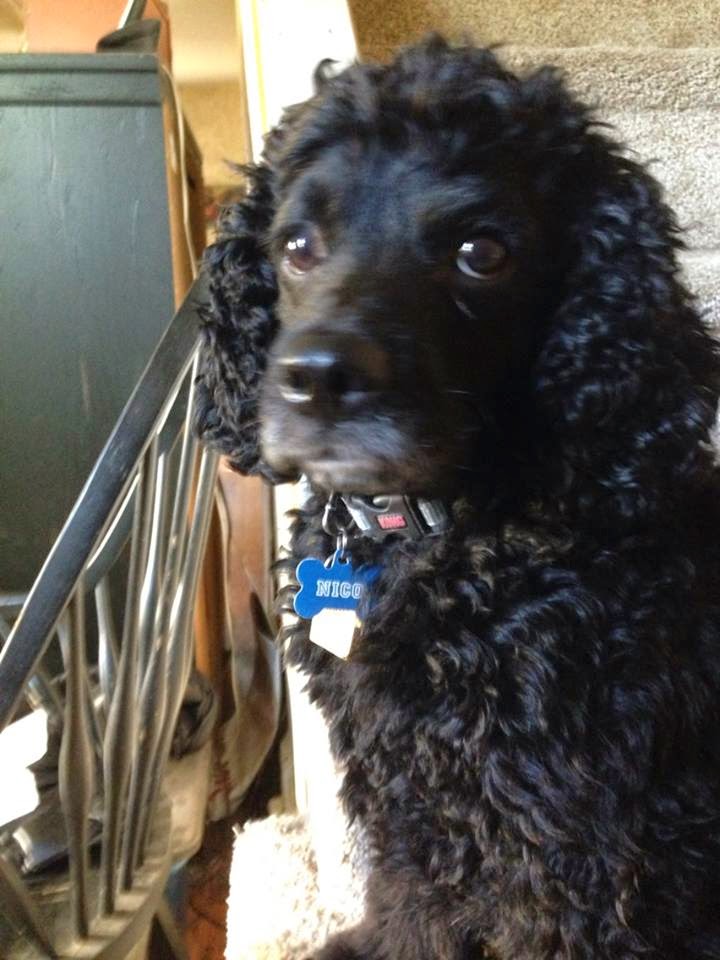 Before So it's been almost a year since we brought home Nico the formerly-stray cockapoo .  All our other dogs, past and present, have been the rugged kind that don't need much in the way of grooming--a quick brushing and a bath every so often. But Nico's the poofy kind.  When we first met him, he was all matted and tangled from his days on the mean streets of Conshohocken, Pennsylvania.  The Montgomery County SPCA shaved away the worst tangles before they handed him over, but three months later, he was a little black cumulous cloud of curls. Lather, rinse, shave...then repeat.  Every three months. Two days ago, Nico visited the groomer's, where he was de-fluffed and pampered: He came home sleek, neat, and smelling like a daisy.  Lovely, right? After Well, yes.  Except it turns out that the newly sleek Nico--a.k.a. Sleeko--can fit through a gap in our backyard fence--one we'd never even noticed before.  One moment he was in the backyard, and t
Post a Comment
Read more

Some Writing About Not Writing 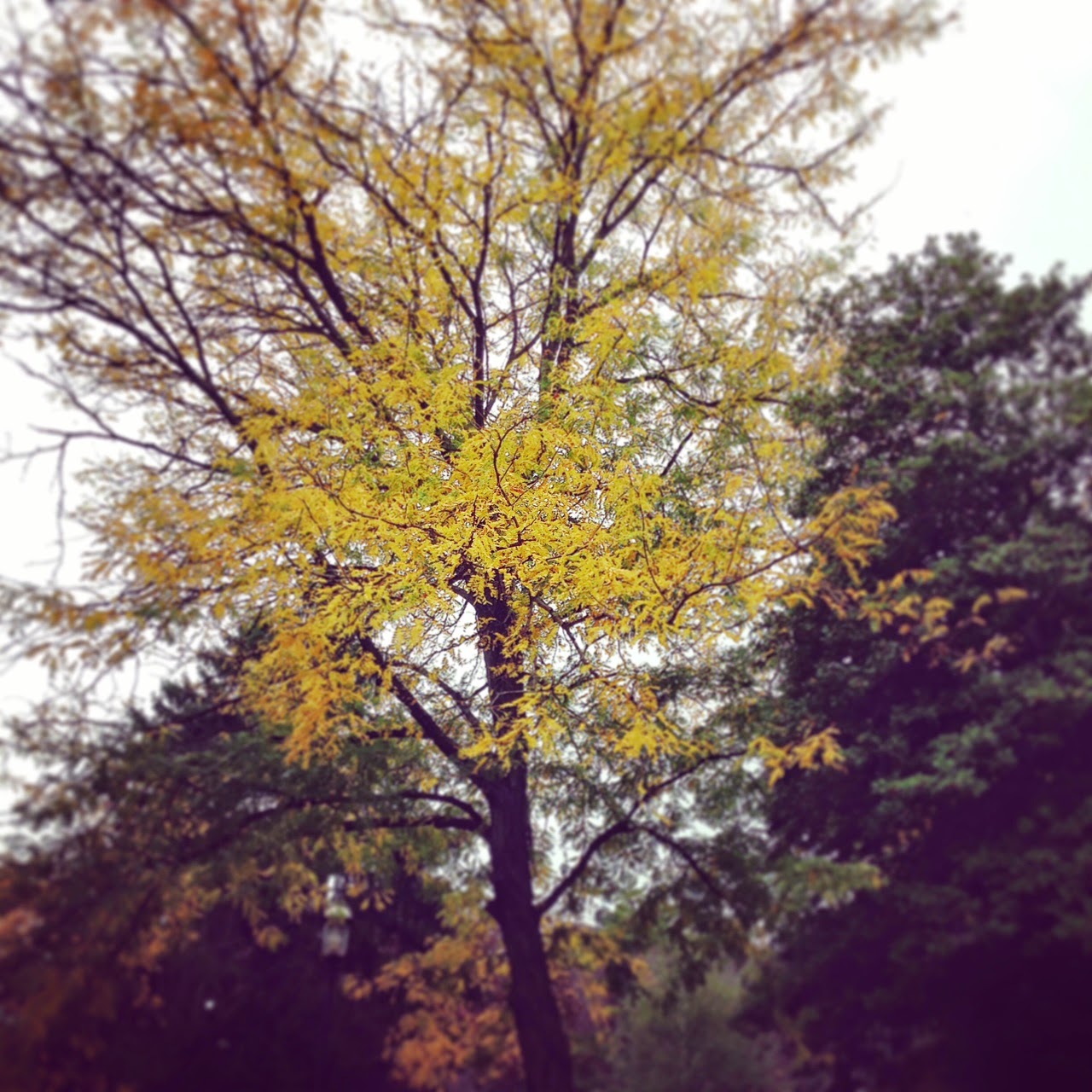 Busy.  Crazy.  Why don't we hyphenate the two?  Busy-Crazy.  That's how things get this time of the year when you're a teacher.  The freshman papers roll in thick and fast, as do the meetings and the student conferences. Add in some book signings and readings in far-flung locales: The calm before the storm They're an awful lot of fun.  And they're an excuse not to clean my house....which is a good thing.  Until the dust bunnies rise up and take over. Recycled Art Dust Bunnies by Suzanne Proulx I'm okay with not cleaning.  I can live with those life-sized dust bunnies.  What's hard is the other thing I'm not getting done: writing.   A writer who isn't writing tends to get cranky or downright depressed, and I'm no exception.  Stray ideas for the book I'm theoretically working on--the one I've been working on more theoretically than actually for months now--ping around in my head at inopportune times.  I list them in Wo
Post a Comment
Read more
More posts