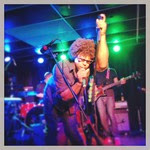 Jake Clemons had some big shoes to fill when Bruce Springsteen tapped him to play sax in the E Street Band after the 2011 death of Clarence Clemons (Jake's uncle).  Fans can be a cranky bunch, and some of Springsteen's longtime followers were skeptical that anyone could come close to taking Clarence's place as Springsteen's tenor sax player and onstage foil.

But it didn't take long before the skeptics came around.  For one thing, Jake can really do justice to songs like Thunder Road, Spirit in the Night, and even Jungleland, a song some fans thought should be retired after Clarence's death.  For another, Jake has a pleasing onstage presence, bringing out a warm and avuncular side of Bruce's personality.  Nobody will ever take the place of Clarence Clemons.  But Jake has quickly become a beloved member of the E Street Band in his own right.

So when my friend and fellow Bruce enthusiast Diane told me that Jake Clemons would be headlining at the Wonder Bar in Asbury Park, New Jersey, it was pretty much a no brainer.  We needed to see the other side of Jake Clemons--the songwriter/front man side.  Neither of us expected him to play guitar and keyboard as well as sax, but he does, ably.  He's got a kick-ass band.  And he's quite the charismatic showman. 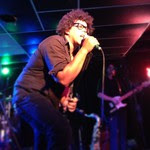 So far Jake and his band have only scheduled a couple of shows, but I hope there will be more, and I hope he'll win the following he deserves.  If you'd like to learn more about Jake Clemons, check out his webpage, complete with very spiffy logo.