The Orange Bottle: A Poem by Joshua Mehigan 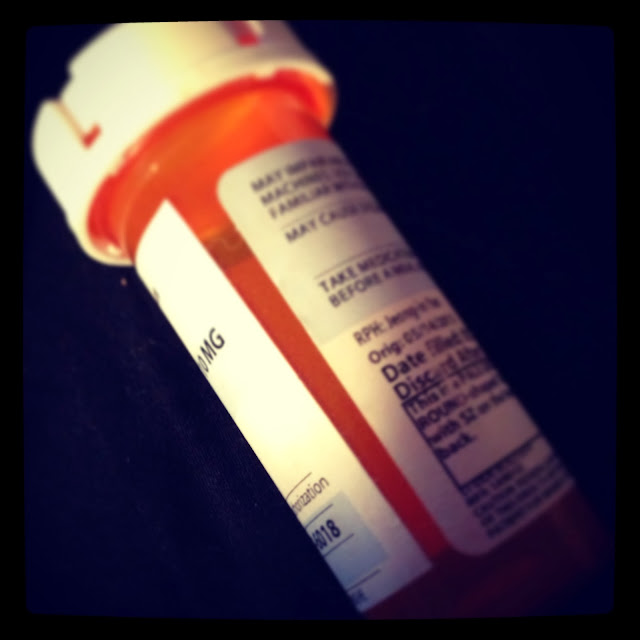 This killer poem, by Joshua Mehigan, knocked me off my feet when I first read it in Poetry Magazine.  Once I started reading, I couldn't stop.  I share it with you now in honor of Joshua's second poetry collection, Accepting the Disaster, forthcoming soon, but not soon enough.

The clear orange bottle was empty.
It had been empty a day.
It suddenly seemed so costly
and uncalled for anyway.

Two years had passed. They had passed
more or less the way years should.
Maybe he’d changed. Or maybe
the doctors had misunderstood.

It was June. The enormous elm tree
was green again, and the scent
of   hyacinth reached through the window
and followed wherever he went.

And the sky was the firmament!
His life was never better.
Each small white spotless cloud that passed
was like a long-wished-for letter.

But then he remembered his promise.
It came like a mild cramp,
and it sat there all day in the back of   his mind
like a gas bill awaiting a stamp.

He saw three faces that Sunday,
mother, sister, niece,
all with the same kind, brown, scared eyes
that brought him no peace.

The sidewalk sparrows were peeping.
His whole house smelled like a flower.
But he remembered his promise.
The drugstore said one hour.

Back home again, he was tired.
The label said caution, said warning.
He left the clear orange bottle
on the lip of   the sink till morning.

It also said night sweats, and
agranulocytosis,
and strongly suggested a full glass of   water
be drunk with all doses.

The insert said all this,
the insert he never read.
But he didn’t have to read it
to know what it said.

The bedroom was calm with moonlight
and the breeze through the screen was cooling.
Through the elm leaves the shivery light on the wall
came like quicksilver pooling.

But   just before five, something woke him —
a close whisper — or maybe a far cry —
and the bedroom was queasy with light the color
of   lapis lazuli.

He lay there listening hard
till six, till seven, till eight    ...
At nine he remembered the bottle.
But nine, nine was too late.

“Don’t take me!” cried the Clozapine.
“Yes, don’t!” cried the medication.
And the bright yellow morning seemed suddenly edged
with a shady fascination.

Why should he go to his workplace?
Who was his supervisor?
He had a sickening feeling
that he was becoming wiser.

His room filled up with interest.
He had begun to think!
He thought of the knives in the kitchen
and the bottles under the sink.

He thought as he switched the stove on
or stood at his shaving mirror,
or reached for his belt in the wardrobe.
Thinking made things clearer.

Even the bedroom window,
the open window full of sun,
continually hinted
at something that should be done.

But he was crooked and useless.
He was a piece of shit.
And so, as everyone knew he would,
he failed to go through with it.

There, just outside his window,
lurked life like a cheap cartoon.
He shut the sash, locked it, and checked it,
and checked it all afternoon.

He lowered the blinds on that world,
no longer an agent of   it,
but then, with one finger, pulled down a slat
and set his eye above it.

The neighbors were thinking out loud.
They knew he was no fucking good.
So he slumped on a stool in the corner
like a bad little snaggletooth should.

They called him a dirty pig, and laughed,
and said he shouldn’t exist.
Sometimes they made a tsking sound,
or oinked at him, or hissed.

They hissed that he was to blame
for everything, and everyone knew it,
and that if   he weren’t such a pussy
he’d know what to do, and he’d do it.

His thoughts were advancing like wolves.
He lay still for an hour and a half,
then reared up onto his rickety legs
like a newborn calf.

Then     rug
hall
stairs
porch
stoop
street
and the blacktop humanly warm
on the soles of   his naked feet.

His walk was stiffened by fear,
but it took him where he was going,
into the terrible world
of children and daffodils growing,
and friendly people helloing,
and the Super out doing the mowing,
and the two old sisters out in wool sweaters with their wrinkled
cheeks pinkly glowing,
and the pretty lady who would give birth by Christmas barely
showing but showing,
and the policeman helping to keep the lazy afternoon traffic
flowing,
and time itself slowing,
and none of them, none of them knowing

that an odious axis was forming,
that it would not be controlled,
that schemes were afoot, that a foot
was a thing for a jackboot to hold,

that the street was a movie set,
that it was not warm and sunny,
that a creditor was calling
who could not be paid with money,

that the world was like a sliver
of   iron held in the hand,
and his mind the lodestone above it
that made it stir or stand,

that the air was slowly changing
to a color they didn’t know,
that he was a famous doctor
on a television show.

But what could he do? Even friends
would take these facts for lies,
and he couldn’t tell who the enemies were,
though he felt the hot breath of their eyes,

so he kept his big mouth shut
and tried to play along,
and plowed down the street toward the coffeeshop
as if nothing at all were wrong.

The coffeeshop smelled like coffee,
but it felt different inside.
A new waitress went by. She winked.
He kept his eyes open wide.

Everything screamed “Run away!”
But he wasn’t really there!
So he stood by the gumball machines
and smiled and tried not to stare.

“The power is yours!” said a T-shirt.
“Look for lightning!” reported the weather.
And the stranger who offered the Sports section said,
“It’s all there, Chief. Just put it together.”

Then wild-eyed out of the kitchen
stormed a small, hard old man,
shouting in a strange language
and waving a frying pan,

shoving him out the door
and into the chattering street,
shoving him, waving, shouting,
and pointing at his feet,
at his bare, gray feet.

Then came the dark blue uniform,
the badge glinting in the sun,
and the belt jangling like a storm trooper’s
as the boots broke into a run.

And the flatfoot pushed him, bleeding,
into the sleek cruiser,
and he heard all the gawkers thinking
that he was a pig and a loser,

and his chin throbbed,
and the handcuffs ate at his wrist,
and he would be hacked into pieces soon
and would not be missed.

Lying on his side like a child
at the end of a big day,
he gazed up through the window
and watched it all slip away.

The little pen where they put him
had a toilet but no stall.
Here and there a message
scarred the gloss-white wall.

Time passed. But you couldn’t tell it
on the trapped fly ticking the ceiling,
or the flickering light overhead,
or the sore on his chin congealing,
or on the sound of the other pigs in the other pens, squealing.

When the men came, he was ready.
He talked. They took it all down.
And soon they were back in the cruiser,
on their way across town.

Then, into the mirrored building,
over the waxed lobby floors,
down miles of echoing hallways,
through the heavy brown doors,

into a humming beige room
with a bed and a river view,
and an outside lock, and jailers
who wore white instead of blue.

“Please!” threatened the nurse.
“Please!” growled the doctor.
He raised his fists to cover his mouth,
but the nurse was too close, and he clocked her.

Now into the room came the big men,
who did not clamor or shout,
but pinned him with ease to the bed,
strapped him down, and went out.

And the doctor was there again, trailing
a spider web of cologne,
and the doctor told what would happen next,
in an expert monotone,

and the nurse took a needle
and emptied it into his arm,
and they both left, content
that he could do no more harm,

and he fought, and the straps cut his shoulders,
and he gnawed at his lip, and it bled,
and he held his bladder for three long hours,
then shivered and pissed the bed.

When the doctor came a fifth time,
it was long past dawn.
They’d found him a room, said the doctor,
gently restraining a yawn.

The next two days were sleep,
and words through a fine white mist.
Then he woke inside a machine
whose motion he couldn’t resist:

In the car away from that place,
the family had a pleasant chat.
He seemed fine again, and humble,
though his speech was oddly flat.

He said that the halfway house
where he would be residing
was located on a quiet block and had
green vinyl siding.

There he met new people
and watched the television,
which did not watch him back
or speak to him with derision,

and he performed certain tasks,
meant to teach certain skills,
and he got small checks from the government
to pay his enormous bills.

Each night he fell asleep,
and each morning he got up,
and he washed down his medicine
and squashed the paper cup,

feeling, in all, much better,
more in touch with common sense,
and also slightly bored
by the lack of consequence.