Walking in the woods with Ted Kooser 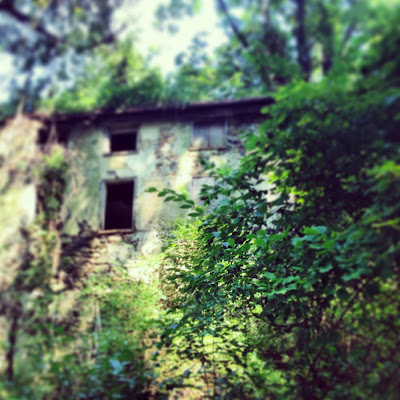 After a morning of putting together my syllabi for the coming semester, I went for a walk in the woods with poems and lesson plans swirling around in my thoughts.  It wasn't too surprising when the above ruin made me think of one of my favorite poems, by former poet laureate Ted Kooser:

He was a big man, says the size of his shoes
on a pile of broken dishes by the house;
a tall man too, says the length of the bed
in an upstairs room; and a good, God-fearing man,
says the Bible with a broken back
on the floor below the window, dusty with sun;
but not a man for farming, say the fields
cluttered with boulders and the leaky barn.


A woman lived with him, says the bedroom wall
papered with lilacs and the kitchen shelves
covered with oilcloth, and they had a child,
says the sandbox made from a tractor tire.
Money was scarce, say the jars of plum preserves
and canned tomatoes sealed in the cellar hole.
And the winters cold, say the rags in the window frames.
It was lonely here, says the narrow country road.


Something went wrong, says the empty house
in the weed-choked yard. Stones in the fields
say he was not a farmer; the still-sealed jars
in the cellar say she left in a nervous haste.
And the child? Its toys are strewn in the yard
like branches after a storm--a rubber cow,
a rusty tractor with a broken plow,
a doll in overalls. Something went wrong, they say.

I teach this poem to my freshmen every year because it's so translucent, so invitingly spooky, but also because it provides such a great object lesson in how poetry works, presenting a string of vivid images that speak for themselves.  The poet gives his reader plenty of clues, but ultimately leaves her to do the work. Something went wrong.  But what?  We'll never know, exactly, but even so we know everything we need to know.