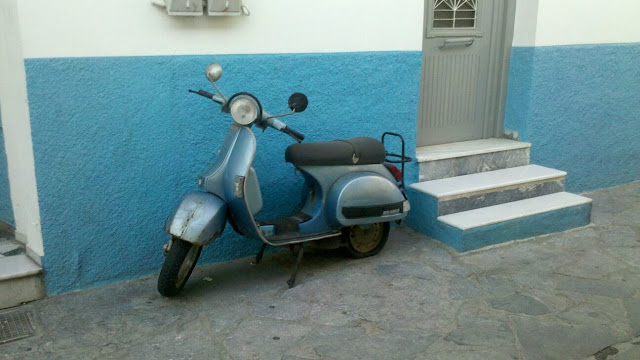 Today my characters travel from Athens to Delphi--that is, if I can get myself to settle down and actually write.  (It's one of those jumpy, hyper-caffeinated days when I can't even seem to get started.) In the meantime, I thought I'd share one of my favorite poems by one of my favorite poets, A. E. Stallings, an American expat in Athens:

An Ancient Dog Grave, Unearthed During Construction of the Athens Metro

It is not the curled-up bones, nor even the grave
That stops me, but the blue beads on the collar
(Whose leather has long gone the way of hides),
The ones to ward off evil. A careful master
Even now protects a favorite, just so.
But what evil could she suffer after death?
I picture the loyal companion, bereaved of her master,
Trotting the long, dark way that slopes to the river,
Nearly trampled by all the nations marching down,
One war after another, flood or famine,
Her paws sucked by the thick, caliginous mud,
Deep as her dewclaws, near the riverbank.
In the press for the ferry, who will lift her into the boat?
Will she cower under the pier and be forgotten,
Forever howling and whimpering, tail tucked under?
What stranger pays her passage? Perhaps she swims,
Dog-paddling the current of oblivion.
A shake as she scrambles ashore sets the beads jingling.
And then, that last, tense moment — touching noses
Once, twice, three times, with unleashed Cerberus.