The Del-Lords: Because I promised to write about rock and roll.. 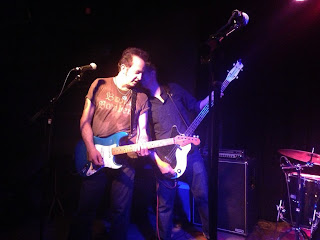 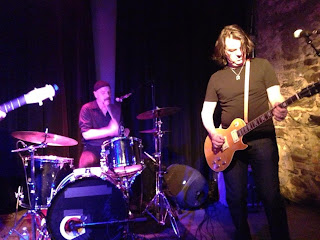 In 1988, my husband Andre and I were living in Yonkers, N.Y. in an attic apartment that got hotter than hell in the summer.  We were newly married; I was in grad school, and we were dead broke.  We didn't have money back then to buy music, but we listened to the radio--a lot.  One day I stumbled onto something unusual; the deejay on a college station was so crazy about a new song he'd just heard that he couldn't stop playing it.  He played it at least ten times running--which might have sent me running for the dial.  But the song was captivating--the tune memorable, the lyrics biting and smart, the guitar solo blazing--and ten times running wasn't enough.  I called Andre into the the room so he could hear it too.

That song was "Judas Kiss" by a band I'd never heard of before, New York's own Del-Lords.

Like I said, we didn't buy CDs back then; we didn't go to concerts either.  Not long after that we had two kids, and signed on for more grad school.  To this day, if a song or movie came out in the '90s, odds are we didn't experience it the first time around.  We went a long time without hearing the Del-Lords again, but "Judas Kiss" stuck with us both.

Years passed.  Our kids got bigger.  We finally put grad school behind us and got jobs. And we started making up for all those lost years, buying music, going to live shows.  Then one day I happened to see a musician named Scott Kempner play a gorgeous acoustic set at a conference in New Jersey.  (It was the Glory Days Bruce Springsteen Academic symposium--but that's a story for another day.)  And though I didn't recognize Kempner by name, he was, by sheer accident, one of the Del-Lords...a name I most definitely recognized.

After that, Andre and I bought up Kempner's solo work, and all the Del-Lords albums we could get our hands on.  By then, the Del-Lords had disbanded, and hadn't played or recorded together in many years.  But we followed them on the internet anyway, just in case.  And one day we saw on their website that they were recording again, and playing concerts in Spain.

Fast forward a little bit more, to a few weeks ago, when the Del-Lords played their first big New York City show in 23 years at the Bowery Electric--coincidentally one of our favorite clubs.  Of course we had to be there...in the front row, if at all possible.  So we were.

And the show was every bit as great as we'd spent all these years dreaming it would be. All three of the original four Del-Lords, Scott Kempner, Eric Ambel and Frank Funaro, are still at the top of their game.  The new bassist, Steve Almaas, more than held his own.  The Del-Lords are enthusiastic performers, and they have the best kind of material--gritty rockers that manage to sweep and soar with emotion.  The crowd at the Bowery Electric fed off their energy, and the show passed, as the best shows do, in a flash.

Elvis Club, their new album is fantastic, too.  Check it out here.