We've got that P.M.A.--A Night at the Wonder Bar With Jesse Malin 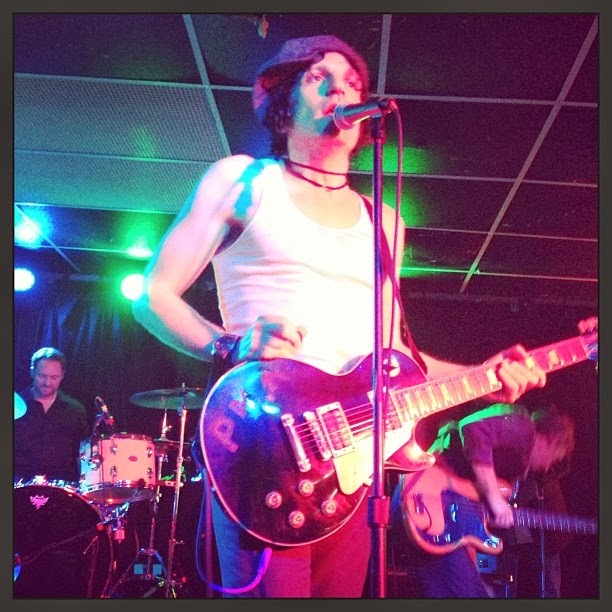 P.M.A.--Positive Mental Attitude--is Jesse Malin's credo--or one of them, anyway.  If you look closely, you'll see the outline of the letters on his electric guitar.  This weekend, when we were sorely in need of a little P.M.A., we drove over to Asbury Park to see Jesse play the Wonder Bar.

Jesse's been working on a new album, and he hasn't been playing live much lately.  Always an energetic performer, he was on fire Saturday night.  His songs--new and old--were delivered with the enthusiasm of someone completely pumped to be back onstage after a long hiatus.  By the night's end, Jesse was hurling himself around the stage with a ferocity I'd never seen before, channeling his former self--frontman for punk band D Generation.  I was up against the stage--because where else would I be?--and a couple of times I thought I might need to catch him...or at least break his fall.

One of the night's highlights was an electrifying performance of The Ramones' "Rock and Roll Radio," in honor of Jesse's cousin, Jersey Shore radio legend Jeff Raspe, who was on hand as master of ceremonies.

Another highlight was the presence of Derek Cruz.  I've seen Jesse play with Derek many times in quieter settings, and I love how well their voices blend. Also, Derek's calm, workmanlike presence provides the perfect foil to Jesse's more garrulous, edgier performance style.  So I was particularly glad to see Derek on hand in a full-band setting.