The Spoils of Rock 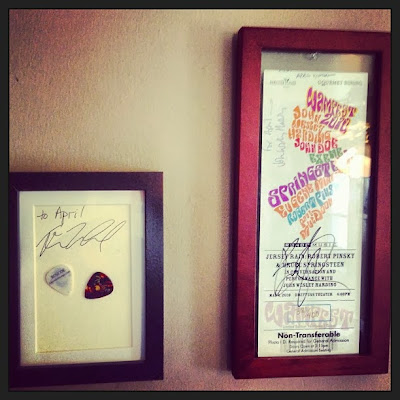 Today Andre helped me put up the beginnings of a rock and roll memorabilia wall.  On the left we've got an autograph and two picks from Eric "Roscoe" Ambel of the Del Lords.  And on the right we've got a ticket from Fairleigh Dickinson University's 2010 WAMFest which featured a conversation/concert with Bruce Springsteen and poet laureate Robert Pinsky, moderated by John Wesley Harding, a.k.a. Wesley Stace.  If you squint, you'll see that my ticket was autographed by Wes and by Bruce.  Robert Pinsky remains the one that got away!

We've got a lot of concerts lined up for October, so I'm hoping my wall will get some new swag soon.

And though it's already hanging on a different wall (with my other favorite memorabilia--poetry broadsides by Charles Simic and Richard Wilbur) I have to share one of my very favorite souvenirs: 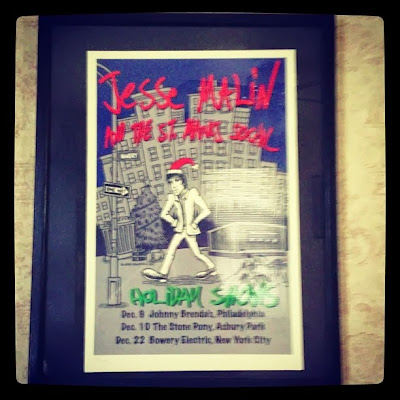 The day the Advanced Review Copies of my novel Catherine first reached me also happened to be the day Andre and I had tickets to see Jesse Malin in concert.  So I brought an ARC along and presented it to Jesse after the show, explaining that he was one of the book's inspirations.  And he gave me the above signed poster in return.

Here's Jesse in action.  I'm happy to say he's one of the acts we'll be seeing soon,